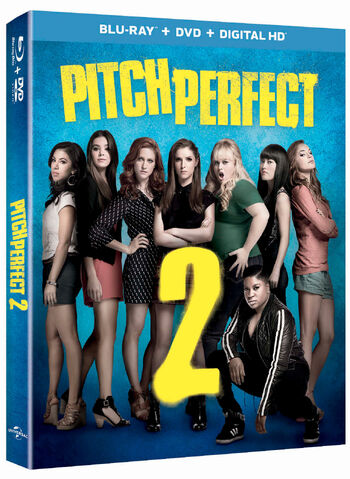 The fabulous Bellas of Barden University are back to compete in the World Championships of A Cappella after a scandal threatens their legacy in Pitch Perfect 2. The high-spirited sequel to the movie that sparked a worldwide phenomenon is coming to Digital HD on September 1st and Blu-ray™, DVD and On Demand September 22 from Universal Pictures Home Entertainment.

Pitch Perfect 2 is packed with more original musical arrangements, memorable one-liners and offbeat romance as the original’s most beloved characters fight to regain their former glory on a worldwide stage facing off against the toughest competition on the planet. Hysterical behind-the-scenes bonus features, never-before-seen deleted footage, all-new musical performances and a hilarious gag reel make Pitch Perfect 2 a must own on Blu-ray™ and DVD.

Here's a sneak peak of the Gag Reel:
Retrieved from "https://pitch-perfect.fandom.com/wiki/User_blog:Witnessme/PITCH_PERFECT_2_on_ACA-AWESOME_DVD_in_SEPTEMBER_2015?oldid=20192"
Community content is available under CC-BY-SA unless otherwise noted.