Treble #1 is a minor character in Pitch Perfect and is a member of The Treblemakers. He is portrayed by actor Steven Bailey.

Treble 1 is a member of The Treblemakers. He was seen in the first performance when Aubrey vomited, but also at the auditions at the end of the movies. So, he probably is at least a year or two from graduation. He has no lines in the whole film.

He is not seen in the sequel since he has possibly graduated before the start of the movie. 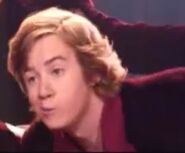