Stacie Conrad is a main character in the first two movies and has a minor role in the third movie. She is the over sexually driven Mezzo-soprano member of the Barden Bellas. She is portrayed by actress Alexis Knapp.

Stacie make her first appearance auditioning for the Barden Bellas where she introduces herself and tell everyone her hobbies include cuticle care and E! Network. Her personality is mainly "sexual" in nature. Stacie takes pride in herself and her appearance. She is later on approved to be a member of the Bellas as a Mezzo singer. During the aca-initiation night, she was able to interact with her fellow Bellas, one of which was Cynthia Rose, which seems to be attracted to her. She was also able to party and dance along with the crowd. Stacie attended all the Bellas' practices, as she and Chloe Beale worked to improve her moves as it was considered to be too sexual. She performs Rihanna's "S&M" with Cynthia Rose and performs another sexual related songs during the riff-off.

She competed with the Bellas during the regionals, semi-finals and finals. When the Barden Bellas had a fight with each other, she got chased around by Cynthia Rose who inappropriately grabs her boobs which caused her to blow her rape whistle. Later on, Beca returned and each of them got along by holding confessions. Stacie admitted to the fact that she has a lot of sex but then Fat Amy stated that the Bellas already knew that before her confession. She and the Bellas compete with the new and improved setlist arranged by Beca and later win the competition. Stacie is last seen at the auditions, along with all the Bellas except Chloe and Aubrey, the latter whom have graduated, getting ready to see the new students auditioning for the Bellas.

She is performing for the president with the Bellas when Fat Amy accidentaly makes a mational sensation. She is determined to do everything to restore the Bellas to its former glory (which she falsely states she's going to "do whoever it takes"). Stacie doesn't recognize Emily's mother, whom Chloe declares as the top bitch of 1981, and is happy to welcome Emily to the group. Her over top sexual behavior is seen to greatly lessened, although it does shown sometimes in the film as posing suggestively on a car when the Bellas go check their rival team, Das Sound Machine, and still grabbing her breasts during performance.

At the secret riff-off, Stacie have a solo when she sings Flo Rida's "Low" during the "Songs About Booty" category and dance suggestively. When the Bellas are on their way to Aubrey's retreat to regain their sound, Stacie make a statement that she isn't supposed to have ideas since she's the hot one, and Fat Amy retorts by saying she's pretty sure she's the hot one. She later graduates with all the Bellas except for Emily and heads to the Worlds Championship. She has a small solo during "Flashlight" and later it is revealed that they are the world champion. She is last seen when the Bellas give Emily a proper Bellas initation before departing the campus.

Stacie is very sexual which classes up the joint, she is seen flirting and touching herself in a sexual way many times in the film. She is also highly confused whether the Bellas should do their pre-performance ritual "on three" or "after three."

She is also a very good dancer in the film but is said to be behind choreography according to Aubrey. She can do splits and stretch her legs far apart. It is unknown if she has a dancing background.

Stacie has a very cheerful and upbeat behavior as seen how she participates and converses in the film. She also has a constant habit of pushing up her breasts.  Yet under her façade she's an insecure and highly sensitive person.

Stacie is an attractive young girl. She has slightly wavy brunette hair which stops at her lower back. She has light blue eyes and has fair skin. Stacie is the tallest out of all the Bellas. In Pitch Perfect 2, Stacie dyed her hair strawberry blonde.

Stacie often wears clothing that reveals her cleavage such as low-cut tops and tank tops. Stacie appears to be a fashionable person as she wears scarves, earrings at the speed of love and make-up. Stacie has very pampered nails as she mentioned her hobbies included cuticle-care.

Relationship status: One sided attraction (Cynthia-Rose's side)
Stacie's most known relationship on the film series is with Cynthia-Rose. Stacie is often seen with Cynthia Rose as both are members of the Bellas. Cynthia Rose is shown to have some sort of affection for Stacie and her attractive appearance. They remain close friends although Stacie is shown to be somewhat uncomfortable with Cynthia Rose. Aubrey Posen and Fat Amy suspected Cynthia Rose was a lesbian. One instance was when she blew her rape whistle when Cynthia Rose was trying to grab her during the Bellas' fight. They were also together during the aca-initiation night when Stacie asked Cynthia Rose if she could count on her to pull up her hair when she pukes. During the riff-off Stacie sang with Cynthia Rose in one song against the Trebles. In the second film, when Stacie make a comment about The Bellas being a bunch of girls that only hang out after their alleged demise, Cynthia-Rose replies "what's wrong with that?" and blinks her eyes. At the Lodge at Fallen Leaves, when the Bellas are about to sleep in the tent, Stacie ask Cynthia-Rose if she touch her breasts and Cynthia said yes.

Relationship status: Possibly mutual attraction
Donald and Stacie are shown to be similar in that they are both flirtatious characters. During the Riff-Off, when the category was 'Songs About Sex', Stacie and Cynthia Rose went up against Donald, starting with "S&M", to which he came back with "Let's Talk About Sex". Aubrey wanted to bring Stacie back to the group, but Stacie retorted with "I'll Make Love to You", to which Donald retreated and let Jesse take over.


When Stacie was performing during the auditions to get into the Acapella groups she did a very sexual move that was reacted to very strongly by several of the Treble's. While most of the guys just laughed or looked a little awkward, Greg was shown to be very interested. His eyes were wide, attentive and focused on her, and his mouth was hanging open in awe before turning into a circular quay form of appreciation. Later, after Stacie had made it into the Bella's, during the celebration the two are briefly seen dancing together. Greg tried to get closer to Stacie from behind and she responded by turning around and playfully tapping him on the mouth. When the Bellas rode on the Treble's bus to the semi-finals Greg and Stacie sat across from each other.

Out of Cynthia-Rose's attraction towards her, Stacie also has interactions with The Bellas.

Relationship status: Friends
Aubrey was seen to be too controlling of the members of the Barden Bellas. Stacie was no exception. One interaction they had in the film was when Aubrey had warned the Bellas not to have sexual relations with any Treblemaker, unto which Stacie questioned afterwards. Stacie often gets confused by the "hands in, Bellas" as she is always ask Aubrey whether they should do it "on three or after three?", which sometimes frustates Aubrey. Aubrey had also said that she was behind on choreography. Nevertheless, in the end nothing really maters, Aubrey and the Bellas were able to sort out their issues. In the deleted scenes, Fat Amy told Aubrey how Stacie had told her that Aubrey's elbows looked weird.


Stacie is friends with the Barden Bellas group. Beca is one of them. They are seen interacting a few times when Stacie called a part of herself a hunter, triggering Beca's amused reply "You call it a dude?." When Beca returned to the Bellas and tried to get the group back together, Stacie was one of the first members to hold a confession. Later on in the movie, on the Bella's bus as they are riding to the Semi-Finals, they all sing Party in the USA, from Chloe's iPod. During the scene, as everyone urges Beca to sing along with them, Stacie waves her right hand, expecting her to sing.They also glance at each other a few times in the movie, and stand next to each other, but very few interaction is seen between the two.

Relationship status: Friends
Fat Amy often give some sarcastic responds to Stacie's statements involving sex. When Stacie attempt to comfort Chloe by saying she would have sex when her doctor told her not to for 6 weeks, Amy commented that she should really listen to her doctor. During confessions, Stacie admits that she has a lot of sex which Amy replies "we knew". Stacie directly responds "only just because i told you". In the second film, when Stacie told everyone she's the hot one, Fat Amy said that she's pretty sure she's the hot one.

Relationship status: Friends Chloe seems to be concerned about Stacie's choreography when she teach her. She seems to handle Stacie's movement and try to hold her whenever she gets to perform sexually driven moves. In the second film, she is confused when Chloe recognize Emily's mother and simply ask "Who?".

"Hi everybody, my name is Stacie, uhm, my hobbies include cuticle care, and the E! network."

"On three or after three?"

"It's just like my lady doctor told me not to have sex for six weeks and I did that anyway."

Stacie: "Well, I'll confess something that none of you really know about me. I have a lot of sex."
Fat Amy: "Yeah, we knew, Stacie."
Stacie: "Only cause I just told you!"

"Been there before,... Oh wait, what were you talking about?"

Stacie: "I will do whoever it takes to get us to the top."
Fat Amy: "You mean whatever it takes?"
Stacie: "Yeah, I'll do that too."

Chloe: "Your mother is Katherine Junk?"
Stacie: "Who?" 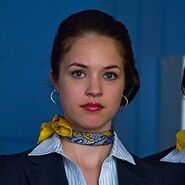 Stacie during the 2012 ICCA Regionals at the Carolina University 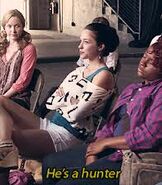