The sequel follows Beca, Fat Amy and the Barden Bellas seeking for redemption in the world of a cappella after going down the chain after a disastrous performance for the President on his birthday.

After the Barden Bellas' performance on President Obama's birthday disastrously ends with Fat Amy's (Rebel Wilson) awry airlifting solo, they are suspended from performing in any a cappella showcase. The Bellas' leader, Beca Mitchell (Anna Kendrick), makes a deal to allow the Bellas be reinstated if they win the Worlds a cappella tournament. Meanwhile, Beca secretly starts a recording studio internship that only her boyfriend, Jesse Swanson (Skylar Astin), knows about. Beca impresses her boss with her mashup skills for Snoop Dogg's Christmas album and is given a chance to become a producer. Fat Amy soon finds out and advises Beca to tell the other Bellas.

Freshman Emily Junk (Hailee Steinfeld) stops by the Bellas' house for an audition and succeeds when the Bellas learn that Emily's mother, Katherine Junk, was once a Bella. That night, the Bellas have a party with the Treblemakers, where Benji (Ben Platt) awkwardly develops a crush towards Emily. The Bellas later attend a car show which they could have performed at, to meet their replacers "Das Sound Machine" (DSM) - led by intimidating duo Pieter Krämer (Flula Borg) and Kommissar (Birgitte Hjort Sørensen). They then attend an exclusive riff off, where they lose against DSM in the final round when Emily tries to sing her own song.

The next day, the Bellas put on a performance similar to DSM as a warmup for the Worlds but ends in disaster. In response, Chloe (Brittany Snow) takes the Bellas to a retreat led by Aubrey Posen (Anna Camp) hoping to regain their lost harmony. Beca's frustration over the camp activities sparks arguments between the Bellas before Beca gets trapped by a net. The Bellas manage to get her down and calm things out at a campfire, with each Bella talking about their dreams and future. They regain their harmony by singing "Cups."

The senior Bellas graduate and all head off to Copenhagen for the Worlds a capella tournament, with Jesse and Benji to cheer them on. Das Sound Machine performs and wow the crowd, but are defeated by the Bellas.

The Bellas perform along with Emily's original song and former Bellas, including Aubrey and Emily's mother, winning them the competition. Afterwards, Emily is given a proper initiation by the senior Bellas.

In a mid-credits scene, Bumper performs an audition on The Voice.

Producer Paul Brooks and director Jason Moore told Variety that since the reception to the film was good, a sequel could potentially happen next year. In December 2012, Skylar Astin revealed that he and Rebel Wilson had meetings with Universal Studios about the potential sequel.

In June 2013, Wilson hinted in an interview that the sequel may be set in London.

According to IMDb, the plot will follow Fat Amy and Beca through their senior year at Barden University. 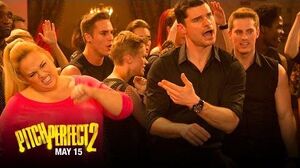 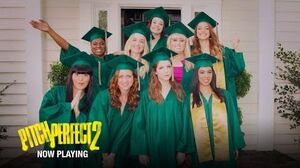