Pitch Perfect Wiki
Register
Don't have an account?
Sign In
Advertisement
in: A Cappella groups, Songs sung in the ICCA

International Championship of Collegiate A Cappella 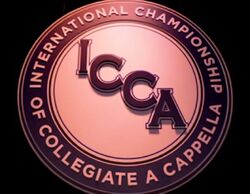 The International Championship of Collegiate A Cappella, also known as the ICCAs, is the annual competition for college A cappella groups.

Now run by a company called Varsity Vocals, along with a high school championship, it is depicted in the film Pitch Perfect and the actual director of the competition has an uncredited cameo as a Regionals judge, according to the home video commentaries.

While the 2012 competition season is depicted in the film as leading to finals at Lincoln Center the real ICCA finals moved from Alice Tully Hall (the sixth largest auditorium at Lincoln Center) to Town Hall (elsewhere in Manhattan) for 2012.