She is also the best friend of Beca Mitchell.

Fat Amy is a student at Barden University. She first appears during the activity fair when she is recruited by Chloe and Aubrey to audition for the Barden Bellas. She introduces herself as "Fat Amy", much to Aubrey's confusion. She explains that she did it so that "twig bitches" like them don't do it behind her back. Later, she shows off her singing ability by matching Chloe's pitch, telling them about herself, and demonstrating her "mermaid dance". Later at the auditions, she asks about back-up dancers before singing "Since U Been Gone". During the aca-initiation night, she chats with Aubrey, and tells her that one of the Bellas is a lesbian, hinting to the "Black Beauty", then they both glance at Cynthia, who is staring at Stacie's boobs. She and Bumper exchange insults and flirt with each other.

She then appears at the first official meeting, where she states that she doesn't want to do cardio by saying "don't put me down for cardio". She expresses that she can't hear Lilly's voice. When the Bellas start their rehearsal, Fat Amy does not participate during the running exercise (cardio), only to be caught by Aubrey. She replies to Aubrey that she is doing "horizontal running". Fat Amy also bluntly states that Chloe's nodes are caused by God, who is punishing her for being a ginger after a failed performance of the new Bellas. Fat Amy participates during the Riff-Off night. During the regionals, she got a solo in "Turn the Beat Around" and performs crazily, much to Aubrey's fear, but gains a huge cheer from the crowds. Aubrey tells her that next time she should be following the original plans to win, when in fact Fat Amy's performing twist was the factor that impressed the audience and judges. After the competition's over, Fat Amy joins an argument that soon turned fight between the Treblemakers and The Tonehangers, and runs away when the police come, leaving Beca to get arrested.

Fat Amy is the one who is driving the bus for the Bellas on their way to Semi-Finals, and while at the gas station, she is attacked by Bumper, who throws a burrito at her. She overreacts and is briefly furious. After she cleans herself, she continues the ride (Beca reminds her there still a taco piece behind her ear) and sings along with the Bellas until the bus suddenly stopped in the middle of the road. She says that she might have forgotten to fill the fuel since she was too angry then. She offers to call Bumper, and Aubrey questions how she has Bumper's number, and she awkwardly did not answer that. She once again exchanges insults with Bumper on his bus. At the Semi finals, after the Bellas performance, Aubrey shouts at Beca over changing the song on their setlist. Amy says it was shocking (in fear of Aubrey). The group loses the competition and they split up during the spring break. Fat Amy is hanging out with her friends at a pool when she gets a message saying that the Bellas are back in the competition.

During the comeback rehearsal (minus Beca), Aubrey becomes increasingly controlling. Everyone is tired of her. Fat Amy sadly states that she joined the Bellas because she wanted to hang out with cool girls and because she was tired of all her ex-boyfriends. It comes to the climax when Aubrey vomits and everyone's going crazy. Fat Amy tries to grab the pitch whistle from Aubrey and Chloe and pushes Lilly when she tries to intervene. She then jumps on them while yelling "move, you bitches!" When Beca arrives, everyone stops what they're doing. She then confesses something at the confession time; her real name is "Fat Patricia". She then silently laughs when Denise says "I still love you" to Cynthia, and says that she and everybody knew that Stacie has a lot of sex. When they sing "Just The Way You Are / Just a Dream", Fat Amy hears an audible voice from Lilly, and says that she doesn't need to shout. At the nationals, she sings and performs with the newly modernized Bellas by Beca, which leads them to victory. The next year, she is seen with Beca and the Bellas, watching the auditions for new Bellas.

The movie starts with the Bellas' live performance in front of President Barack Obama and his wife. Fat Amy has a big solo on her own, which results in the bottom of her costume splitting. This horrifies the world (including Obama) and humiliates the Bellas. Things get worse as Fat Amy turns to face the audience and in turn, unwillingly shows off her private part. The news comes on later, saying that Fat Amy has given the President a birthday present "from down under". She is dating Bumper Allen and is in love with him.

Fat Amy is the first Bella to be introduced to Emily Junk. When Emily explains that she wants to join the Bellas, she sadly tells Emily that they aren't doing auditions.

Fat Amy is a confident and cheerful person. Despite being overweight, she is not easily ashamed. Instead, she embraces that she is hot. She is comedically sarcastic towards the other Bellas; she is always teasing Cynthia-Rose for being a lesbian, sarcastically comments that Lilly does not need to shout after speaking at an audible level, and says "we know" after Stacie confesses she had a lot of sex. She is also sarcastic towards the more popular people, like Chloe, when she says Chloe's nodes were God's punishment for being a ginger. She is easily angered for brief moments, as she attacks the Tonehanger members, is verbally angry with Bumper after being thrown at by a taco, and jumps on Chloe and Aubrey. However, her confidence actually hides other things she is ashamed of; such as her original name being Fat Patricia. Above all of those things, she genuinely loves her friends and is a loyal friend by herself.

Fat Amy and Bumper are usually seen fighting and bickering. One of which is when Bumper insulted her during the Aca-Initiation by calling her the most disgusting human being he's ever seen. Bumper does mean things to Fat Amy such as insulting her, hitting her chest with a microphone, and throwing a burrito at her from the bus. Fat Amy also does openly insults and (comedically) threatens him (like saying "I'm gonna finish him like a cheesecake"). However, both of them also shown to be interested in each other when Bumper thinks they should kiss and that Fat Amy also unexpectedly revealed that she has Bumper's number. In the sequel, Bumper becomes Fat Amy's boyfriend. It's revealed they are in love with each other.

In the third movie, he is now her ex-boyfriend as talked about her break up with Bumper as she mentioned him supposedly not being over Fat Amy by having a tattoo of her on his butt to see her whenever he can.

Fat Amy is the first Bella who realizes that Cynthia is a lesbian and immediately tells Aubrey about it. Cynthia also tries to give her respiration when she is attacked with a burrito by Bumper (she actually tries to kiss Fat Amy), but Amy gets up and refuses her, knowing her intentions.

Amy performing on stage for the Bellas 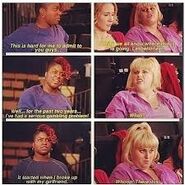 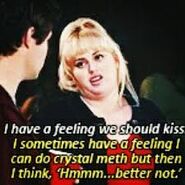 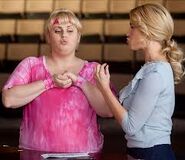 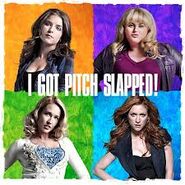 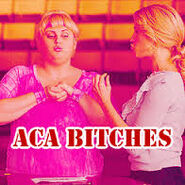 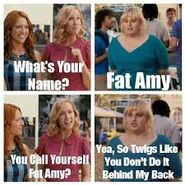 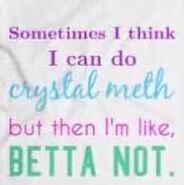 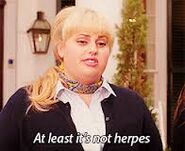 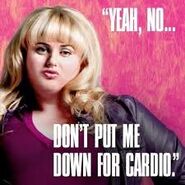 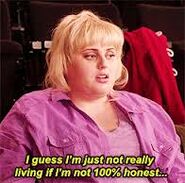 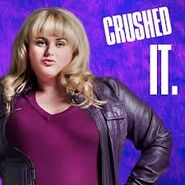 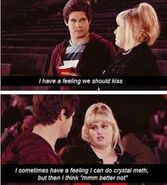 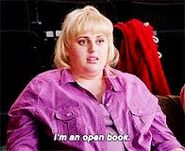 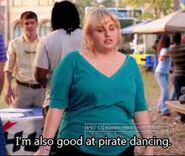 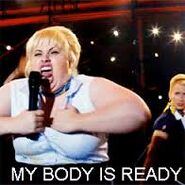 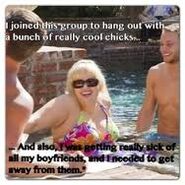 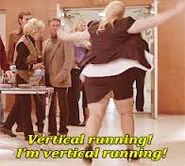 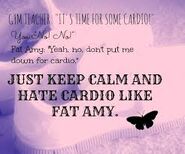 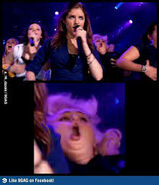 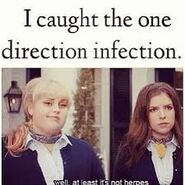 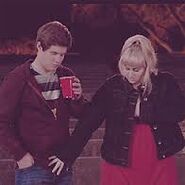 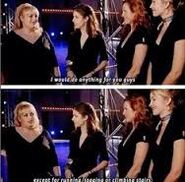 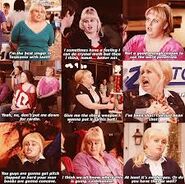 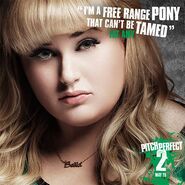