Bologna Barb is a female student in Barden University and member of The BU Harmonics. Though her name "Barb" is known, her last name is unknown but Chloe refers to her as "Bologna Barb" due to her large areolæ.

She is a senior like Chloe and Aubrey, since she mentioned that she has tried to get in the Barden Bellas for three years in a row but never got accepted into the group because her boobs look like bologna.

After the humiliating loss of the Bellas, their popularity has declined, making less people want to join. In a desperate attempt, Aubrey and Chloe, the remaining members of the Bellas, ask Barb if she would like to join. She rebuffs them, before insulting them by saying that the Bellas are done.

Later, it is seen that she joined the BU Harmonics, another acapella group in Barden University. She is seen in the Riff-off singing Like A Virgin before being cut off by Aubrey with Hit Me With Your Best Shot. When Beca sings No Diggity, she is the last person in her group to sing along, but she eventually does.

Despite having been a student for four years, at the end of the film she is seen at the following year's auditions,apparently now a leader of the Harmonics. 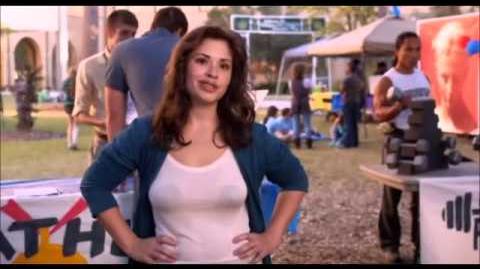